Some readers will find this story disturbing

Dr Siobhan Weare of Lancaster University Law School carried out the first research into force penetration in the U.k in  2016-7, gathering information from more than 200 men via an online survey.
Her latest study, published this week – based on one-to-one interviews with 30 men between May 2018 and July 2019 – explores in greater detail the context in which forced penetration occurs, its consequences, and the response of the criminal justice system.
All the participants were anonymised, but I will call one of them John.
John says the first sign that something was wrong was when his partner started to self-harm. After a particularly frightening incident he rushed her to A&E for treatment. The couple spent hours discussing possible psychological causes.
About six months later instead of harming herself, she trained her sights on John.
“I was sitting in the living room and she just came in from the kitchen, punched me very hard on the nose and ran off giggling,” John says. “The violence then started happening quite regularly.”
She tried to get help from her GP, John says. She had some counselling, and she was referred to a psychologist – though didn’t attend the appointment.
She’d come home from her job “and basically demand sex”, he says.
“She would be violent, and it got to the stage that I dreaded her coming back from work.” 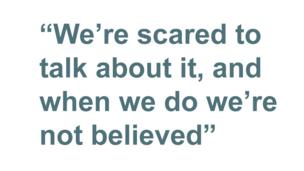 On one occasion John woke up to find that his partner had handcuffed his right arm to the metal bed frame. Then she started hitting him on the head with a loudspeaker from the stereo system beside the bed, tied up his other arm with some nylon rope and tried to force him to have sex.
Scared and in pain, John was unable to comply with her demands – so she beat him again and left him chained up for half an hour, before returning and freeing him. Afterwards she refused to talk about what had happened.
Not long after that she became pregnant, and the violence abated. But a few months after the baby was born, John again woke one night to discover that he was being handcuffed to the bed.
Then, he says, his partner force-fed him Viagra and gagged him.
“There was nothing I could do about it,” he says.
“Later I went and sat in the shower for I dunno how long… I eventually went downstairs. The first thing she said to me when I went into the room was, ‘What’s for dinner?'”
When John has tried to tell people about it, he says he has often met with disbelief.
“I’ve been asked why I didn’t leave the house. Well, it was my house that I’d bought for my kids. And the financial side as well, I was so locked into the relationship financially,” he says.
“I still get disbelief because it’s like, ‘Well why didn’t you hit her back?’ I get that quite a lot. Well that’s a lot easier said than done.
“I wish I’d run away a lot sooner.”