A Nigerian policeman, Edward Onoride in his tweet said that Nigerian female soldiers are lazy as he backed First Lady Aisha Buhari who told military authorities to deploy female soldiers to counter insecurity challeneges witnessed across the country.
Recall LIB reported that Aisha Buhari partly blamed the security crisis witnessed in the country on the yet to be definded role of women and cold feet in exploring their potential for operational effectiveness in the military.
Reacting to the report, the Nigerian policeman recounted fighting wars with female soldiers from other countries while also stating that there is a lot female soldiers can do if deployed. He tweeted;

I had fought war along women soldiers from different countries. I was in Sudan & Somalia & I’ve work with women soldiers from China, US, Britain, Israel, Kenya, Bangladesh, Uganda, Ethiopia, etc. Aisha Buhari is spot on. There’s a lot our women Soldiers can do of deployed out. 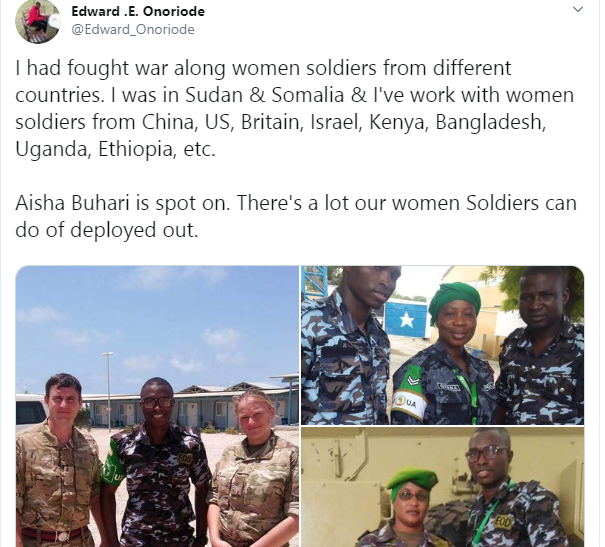