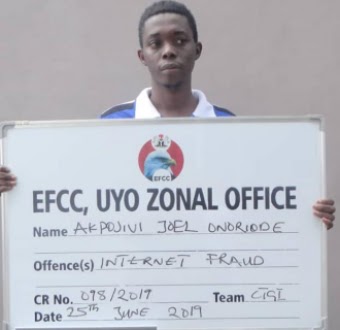 Justice Simon Amobeda of the Federal High Court sitting in Calabar, Cross River State, on Wednesday, June 26, 2019, sentenced a notorious yahoo yahoo kingpin, Akpojivi Onoriode, who was arraigned by the Economic and Financial Crimes Commission, EFCC, on a one-count charge bordering on cybercrime.
The convict, a 29-year-old graduate of Delta State University, Abraka and a father of two, was arrested by operatives of the Uyo Zonal Office of the Commission in the early hours of Saturday, May 4, 2019, following intelligence report exposing him of living above his means. He was picked up at his lavishly furnished duplex on Plot 10, Block VI, Unical Satellite Town, Calabar, Cross River State.

Upon his arrest, the convict, popularly known as “Blinks” or “Mr. White”, confessed to having offshore accounts in China, and narrated how he started the business of defrauding people quite early, while he was still an undergraduate at Delta State University, Abraka in Delta State.